On the weekend of October 3 & 4, Ss. Peter & Paul Church in Manville celebrated their 100th anniversary. On Saturday morning, a General Memorial Service was held to commemorate the departed parishioners and benefactors of the parish. There followed a brunch for all in attendance.  In the evening Vigil Service was held with Archbishop Michael and visiting clergy and faithful, followed by a  Supper in the Parish Center. On Sunday morning, Archbishop Michael celebrated Hierarchial Divine Liturgy with Fr. James Parsells, the rector and Archpriest Paul Shafron, a long-time and neighbor and friend of the parish with the following priests who are all vocations from the parish:  Archpriest Alexander Padlo (Ss. Peter & Paul Church in Miami, Fl.); Archpriest David Koles (Holy Trinity Church in New Britain, Ct.), Priest Justin Frederick (St. Maximus, Denton, Tx.), and Priest John Parsells (Christ the Savior Church, Berlin, Md.). Before the Divine Liturgy began, Archbishop Michael consecrated a new Antimension for the church and later spoke about it’s significance in his homily. A number of Gramotas were presented to parishioners as well as to Mr. George Filippakis, the iconographer who labored over 40 years in adorning the Church with Byzantine iconography  and  to Proto-Deacon Paul Sokol on the 20th anniversary of his ordination to the deaconate. Later in the day, a Grand Banquet was held at the Bridgewater Manor, where friends and former parishioners gathered together to celebrate the festal day. A sneak-preview of the one hour and 20 minute video of “The 100th Anniversary of Ss. Peter & Paul Church,” was presented. This video will be released in full in December. For all things we give Glory to God, honor our heavenly patrons, are mindful of our departed, express gratitude to our parishioners and re-dedicate ourselves to be co-workers with the Lord in service, faithfulness and love.  Thank you to Nick Kita for the wonderful pictures.

Until further notice, there will be no public services at Ss. Peter & Paul due to the Coronavirus.

The Church is open for all services.  All are welcome!

As of May 28, 2021 the restrictive regulations on social distancing and the wearing of masks in the church building and church social center have been removed.   There is no longer any Registrations for any services.

Parishioners and friends of the parish are asked to join the parish mailing  for up-dates and changes in the schedule.  Every Friday, "Parish Notations" are mailed to those on the list with up-dates,  the schedule for the next week and information about our parish life and activities. We cannot sign you up to the Parish E-Mail List, you must do it yourself.  Scroll down for signing-up. 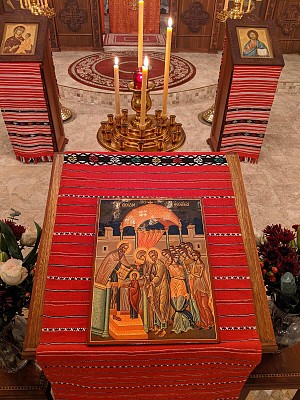