Until further notice, there will be no public services at Ss. Peter & Paul due to the Coronavirus.

Regular services are now being held at Ss. Peter & Paul Orthodox Church.  All are welcome!  The monthly calendar gives the type and time of services. As present civil authority regulations permit only 30 persons at any given service. It  is necessary for you to register for Sunday Divine Liturgy and any Other service that is marked “registration.”  To  register go to signupgenuis or e-mail Maria Torrisi mdtorrisi@gmail.com or Father James frjames@ssppoc.org or leave message on the parish phone 908-685-1452.  Registration deadline is Fridays evenings at 9:00p.m.

Reminder that you are required to observe social distancing and wear a mask or face covering, except for children under age of 2. For further information or clarification about the schedule or health regulations, please contact Father James Parsells. 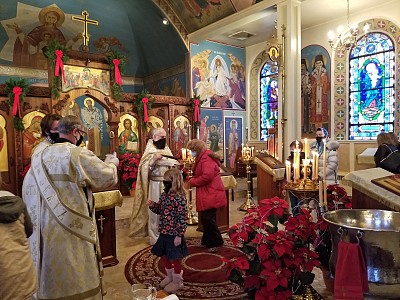